August 14th marked the one year anniversary of matthewestock.com. Not only has the site grown since then, it has also gone through quite a few iterations. It’s time for a fresh start.

This would normally be a perfect place to include a picture or two of the old versions, but that’s no fun. Instead, here’s a terrible webcam picture of me and some friends from just a week or so before the original release: 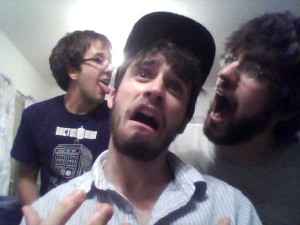 I’ve done a lot in 365 days. A year ago I landed my first web developer job and started training kickboxing. Since then, I’ve also entered into the world of photography, finally saved up enough money to build myself an outstanding computer (which I’ll probably post pictures of, because nerd reasons), finally quit the deli, and dated exactly zero girls. I’ll consider myself lucky.

Updating this site is a fresh rolling reboot, a monument to my forward momentum. Hopefully I can keep the conversation fresh, and hopefully whoever reads this gets at least a chuckle. Here’s to another solid year of website ownership!

General How To Review Update